It’s been a year. With the conclusion of תשפ”א, we’ve created a quick overview of the past twelve months here at Jerusalem Estates, with the challenges that we’ve overcome and the successful milestones we celebrated. And there were many

When the initial confusion and panic that followed the outbreak of corona wore off, a level of paralysis started to fade from the business world. The real estate market roared back to life, and demand for housing exceeded that of the months preceding the pandemic.

The airports were deserted when our sales team flew to the states amidst a storm of international travel restrictions. They flew United – the only airline to still make the daily trans-Atlantic flight at the time. A bold move, perhaps, but the overwhelming demand coming from overseas could not go unheeded.

Transactions were closed in rapid succession as we neared the date for occupancy. In a unique demonstration of the credibility attributed to the project, buyers grounded by travel restrictions purchased apartments remotely, without even viewing their residences firsthand.

The occupancy permits for our first four buildings were duly received as the first families made their move and began to experience the extraordinary living and amenities of Jerusalem Estates.

By July of 2021, we had reached a record half year sales of $100 million, as high as the total sales from 2020. As the buildings were occupied, buyers closed on more apartments, which brought the total overall transactions at Jerusalem Estates up to $350 million. The incredible demand for new housing compelled us to move ahead with the construction and marketing of HaLulav and HaOgen, which are in Phase III of the project.

And that was the perfect time to unveil the newest feature of Jerusalem Estates: Bronze. With an array of luxurious amenities, these hotel-style accommodations offer guests an exclusive, five star experience in the heart of the city. The Bronze suites boast luxurious bedrooms, an expansive, fully-equipped kitchen, a comfortable seating area and Jerusalem balcony overlooking the colorful, bustling streets of Geulah.

The private boulevard and public spaces received their final touches, and it was time to document the spectacular results. Winter brought gentle showers that had the Amphora Garden in full, glorious bloom, and residents enjoyed the view as they strolled among the paths, benches and ecological ponds. Assaf Pinchuk, professional architectural photographer, captured breathtaking scenes which brought the reality to our markets both in Israel and abroad.

The gatehouse and concierge pavilion were meticulously designed and executed, yet another display of the impressive artistry that characterizes every facet of Jerusalem Estates. Aside from adding to the elegant milieu, the gatehouse also ensures the privacy of our residents, regulating entry to the complex and assisting residents and guests.

The special 360° tour we sent out last month has now been joined by beautiful summertime images from the artistic lens of Assaf Pinchuk. You can now view the promenade in full bloom, the flowering beauty in a place that has already become a gem in the crown of the Holy City. 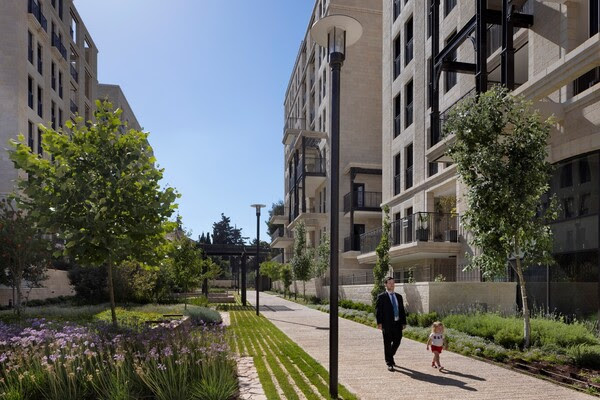